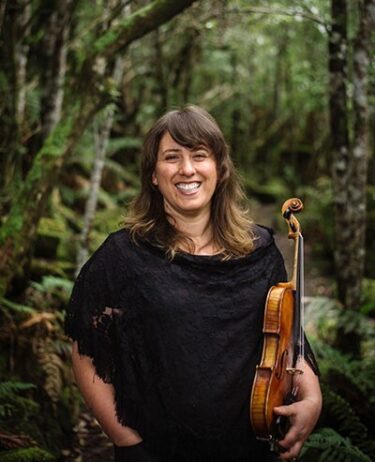 Rachel has worked on several competitively-funded projects, including for the Australian Research Council and Arts Tasmania. Many of her creative projects have had a community focus, and she has recently started working with Van Diemen’s Band to develop their community engagement strategy. She has worked in schools as a Teaching Artist with The Songroom, worked as an artist mentor for the Hobart City Council ‘Ability to Create’ program and taught instrumental music for over fifteen years.

Rachel has led projects that have received support from Arts Tasmania, Folk Federation of Tasmania, the Australian Art Orchestra, City of Hobart and Tasmania Performs. She is currently studying for a PhD in environmental sound art and musicology, and in receipt of a prestigious Research Training Program Scholarship.

She is deeply passionate about working with ecological and musicological stories of place and identity, and using art as a tool for real, tangible community change. Rachel has been working on moving her creative practice towards her research interests in environmental sound art and experimental music, and in 2020 debuted ‘Southern Ecophony: Wind and Water’, commissioned by Next Wave Festival and Liquid Architecture, and which was recently included as part of the curated Site and Sound exhibition at McClelland Gallery and Sculpture Park in Melbourne between January and April 2021.