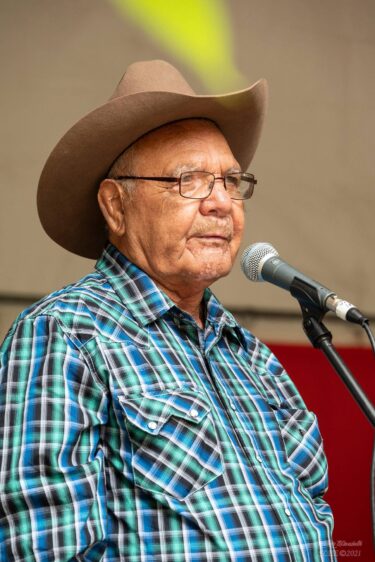 Mr Peter Salmon is a Thiinma Elder and renowned stockman from the Upper Gascoyne region of Western Australia. He has worked on sheep and cattle stations since he was 10 years old – in 1943 – and grew up on-country with his mother and grandfathers, learning to speak many regional languages, including his language of Thiinma and his stepfather’s language, Warriyangga. At 87 years old, Mr Salmon continues to work as a musterer, and has recently embarked on a new career of songwriting. After many years of not speaking his mother tongue, Peter began working with linguists Rosie Sitorus and Jacqui Cook in 2017, and has since recorded over 100hrs of language audio, written 17 songs in Thiinma and Warriyangga language, and will soon be a published author on the release of a storybook written jointly in Thiinma/Warriyangga and English.