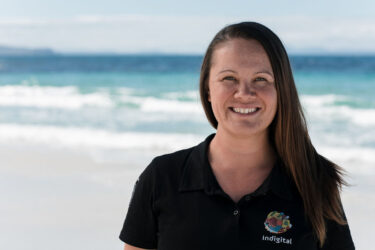 Mikaela Jade is a Cabrogal Woman from the Dharug-speaking Nations of Sydney. She started her technology journey in 2012 with an idea that would help shape our nation – augmented and mixed reality production, and later, digital skills programs to leapfrog First Peoples’ in to the Fourth Industrial Revolution. To drive this idea forward, Mikaela created Indigital in 2014. On the journey so far she has partnered with several remote Aboriginal and Torres Strait Islander communities, Microsoft Australia and Telstra Purple to scale Indigital’s work nationally. Indigital’s flagship program is Indigital Schools. Indigital Schools is an Indigenous designed digital skills training program for primary and high schools students. It enables Indigenous and non-Indigenous kids to connect with and learn from Elders about cultural knowledge, history and language, while learning digital skills in cutting-edge technologies like augmented reality, animation and coding. As Australia’s first Indigenous edutech company Indigital’s mission is to close the digital divide between Indigenous and non-Indigenous peoples, by providing a meaningful pathway for Indigenous people into the digital economy and the creation of future technologies. She achieves this by ensuring Indigenous Peoples’ have access to developing cutting edge, safe, ethical, affordable, quality digital engagement that is appropriate to their social, cultural, environmental and economic needs.