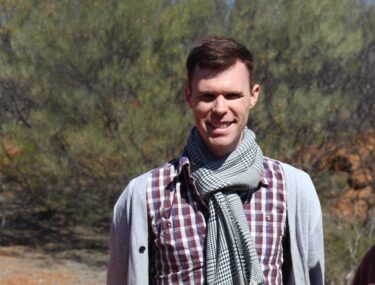 Dr James Bednall is a linguist from Perth, WA. He has spent the last decade working in collaboration with Indigenous communities across WA and the NT on projects to document, revitalise, maintain and advocate for Indigenous languages. He has worked very closely with the Badimaya and Anindilyakwa communities, in particular working alongside Badimaya speaker and Elder Gami Ollie George (RIP) from 2010-2018. Together they compiled 10 Badimaya books and resources (including a Badimaya Dictionary (2014)), as well organising two outreach projects with the community that combined the mediums of text, audio, photography, video and original artwork to display and showcase Badimaya language, country and history: On Badimaya Country (2013) and Nganang Badimaya Wangga (2017). James has also worked extensively with community organisations across WA and the NT to provide linguistic support and training to Indigenous language officers and community members. James is a classically trained musician, and uses his musical background to work on and support linguistic and ethnomusicological projects. He is currently a lecturer in linguistics at Batchelor Institute of Indigenous Tertiary Education, a visiting fellow at the Australian National University, and a research affiliate at the Centre of Excellence for the Dynamics of Language.