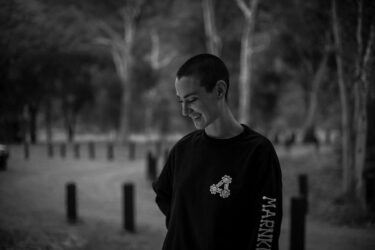 Born and raised in Mparntwe/Alice Springs, Frankie’s practice as a dance artist spans performance, choreography, teaching, community based work and large scale dance projects. Based in Melbourne for a decade, Frankie has worked and made work for multiple companies and choreographers across Australia, including Chunky Move and Lucy Guerin Inc. as well as choreographing, performing and produced multiple independent seasons with 2NDTOE collective. In 2015, Frankie spent 18 months creating, presenting and collaborating on projects in Europe, before refocusing her practice back in Alice Springs. Frankie has a large involvement in teaching and dance development, most notably founding the Alice Can Dance performance education program in Alice Springs. Frankie is an alumnus of the 2017 Australia Council Future Leaders Program and was Chairperson of the Watch This Space ARI Board from 2017 - 2020. Since returning to Central Australia, Frankie and long time artistic partner Madeleine Krenek have created and presented two full-length works The Perception Experiment (2017) and The Lost Dance Project (2018), and one short work DANCE (a short homage) (2020) alongside teams of national collaborators. The Perception Experiment has gone on to tour throughout Australia and internationally throughout 2019/2020. In 2018, Madeleine and Frankie launched GUTS Dance // Central Australia.